Selangor officer-in-charge of traffic, Deputy Supt Azmi Mansor, said Chua was driving his Proton Perdana V6 car heading towards Damansara when it collided with a water tanker that was watering plants along the LDP at about 2am.

A Fire & Rescue team from Damansara rushed to the scene of the accident to remove Chua who was trapped in his car.

It is learnt that Chua died at the scene due to head injuries. The Malacca-born Chua was one of the longest-serving hockey players in the country.

Chua, the youngest of the four siblings was killed in a road accident early today morning when his Proton Perdana crashed into a truck which was watering the plants along Damansara – Puchong Highway (LDP).

Chua’s elder brother Aliff, who converted to Muslim eight year ago held his tears back and told reporters “This is a big loss for us (family). He (Chua) was always pampered by all of us and hockey was his everything.

“The last time I met him was last month, and today I have lost my brother whom I loved a lot.

Aliff, had also lost his father due to a road accident which happened nine years back.

“I am lost for words and I wish this didn’t happen”, added Aliff.

42-year-old Aliff was the man behind Chua’s love for hockey, as the he was the one who encouraged his younger brother to pick up hockey.

“I bought him his first hockey stick when he was only six and it all started from there. He was a fighter on the pitch and he always does the best he can for his team,” said Aliff. 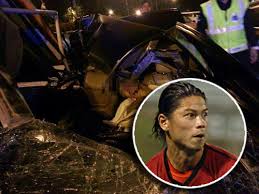