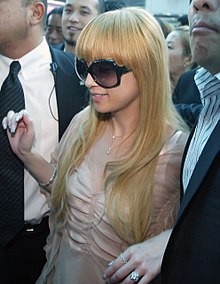 Kelly, 41, has been in a happy relationship with Alex for 16 years. The couple married in 2008, and currently enjoy an idyllic life with their two sons.

However, news broke yesterday that Alex was spotted having French cuisine with Haruka at a gathering.Although there were a lot of other people present, the two behaved intimately, sharing a menu and looking at each other tenderly. They spoke in soft tones, and Alex purportedly even seemed unwilling when Haruka had to leave – sparking rumours that their relationship is not as simple as it seems.

Female pilots are still rare in Japan (only 20 out of 2,500 pilots at ANA are women). “Miss Pilot” depicts the struggles that female pilots are facing everyday, Horikita said.

“Miss Pilot” will be Horikita’s second time to play the lead in TV series since NHK’s morning drama “Ume-chan Sensei” last year, which had an average viewer rating of 20.7%. It was the first time in 9 years for the average rating of a morning TV drama to exceed 20%.

“Helter Skelter” has taken a heavy toll on Japanese actress Sawajiri Eriki, as she has been reported to be on hiatus due to poor health conditions since early May.

According to Tokyo Hive, Sawajiri was forced to cancel her promotional activities for her comeback film, and might not even be able to appear on the premiere of the movie in July if her health condition does not improve.

“Because of her poor physical condition, the promotional events will be canceled,” a media statement from her agency said.

Causes of her health’s deterioration were not officially known, but sources believed that her leading role in the adaptation of Okazaki Kyoko’s manga about a top idol, Ririko, who undergoes a full-body plastic surgery and becomes famous but then suffers the aftereffects, could have a negative impact on her physical and mental well-being.

The movie generated some buzz since it has some challenging sex scenes and it was Sawajiri’s first movie role since the controversial “Closed Note”.

“In her upcoming movie, she’s challenged herself to intense sexual scenes. She’s an actress who becomes absorbed into her roles, so the heroine Ririko wouldn’t leave her body for a long time. She seemed to be down,” said a source from the film industry.

“It’s filled with scenes of mental confusion; it’s a dangerous role so it’s not strange that her spirit would fall apart. I don’t have the courage to have our actresses play the role,” another source said.

Her agency has said that Sawajiri was advised by her doctors to take a good rest for a while and would only be resuming her activities at the appropriate time by her doctors.

According to BonyEntertainment02,  The first teaser for Helter Skelter live-action film adaptation.
The film is due for release in Japan on July 14, 2012.

Actress Erika Sawajiri makes her return to the big screen after a 5 year hiatus.
The movie based on Kyoko Okazaki’s manga “Helter Skelter” (published by Shoudensha in 2003). Manga “Helter Skelter was the 2004 Grand Winner of the Tezuka Osamu Cultural Prize.

☆ PLOT ☆
Top star Ririko undergoes multiple cosmetic surgies to her entire body. She’s looked upon as an icon for beauty. As the toll of her multiple surgies begins to take its toll, Ririko makes the lives of those around her miserable as she tries to deal with career and personal problems.

According to the Sankei Sports newspaper, talento Inoue Waka (31) is getting married on her next birthday, May 13th. Her husband will be 33-year-old movie director Iizuka Ken (“SAI-REN,” “Summer Nude”), who recently worked on the live-action television and movie adaptations of “Arakawa Under the Bridge.”

The two first met in March of last year during the filming of “Arakawa Under the Bridge.” Their relationship was said to be purely professional at the time, but they met again during a group meal in May after filming was completed and started dating soon after that.

Iizuka also cast Inoue in his stage play “FUNNY BUNNY,” which is currently running until the end of this month.

The Sankei Sports newspaper says that Inoue’s agency has confirmed that she is getting married. It is said that she plans on continuing with her show business career.

According to Japan Today, actress Erica Sawajiri, 25, has designed a line of clothes and handbags as part of a promotion for a new cell phone drama she is appearing in. The new line is a collaborative effort between BeeTV and popular brands Samantha Thavasa and MERCURYDUO for the drama titled “Let M the reason why I love you other story.”

The story is about two women who are opposite in fashion, hairstyle, make-up and personality. Sawajiri plays both characters and designed clothes and bags to match each character in the drama.

Actress Chinatsu Wakatsuki is 5 months pregnant and has married an older man who’s not in the entertainment industry. She made the announcement on her official blog.

Wakatsuki who is 27 years old has known her husband for 3 years; however, they dated for 1 year and 3 months before they got married.

According to Japan Today, Wakatsuki submitted marriage registration papers to her ward office in Tokyo on Tuesday January 17, 2012.

Wakatsuki is a fashion producer while being in charge of the popular brand WC. and she’s due to give birth June 2012.