According to the photos, Kim Woo Bin looked healthier as his hair grew out long – just as his close friend Cha Tae Hyun had mentioned on Radio Star. He was previously seen visiting Lee Jong Suk’s cafe!

His long hair cascaded down his face but anyone could tell that the tall, handsome figure belonged to none other than Kim Woo Bin!

Sidus HQ confirmed that Kim Woo Bin’s health has gotten much better but there are no set plans on his comeback as an actor.

“His health has gotten a lot better, but we don’t have certain plans on his comeback. We are still focusing on his health.” 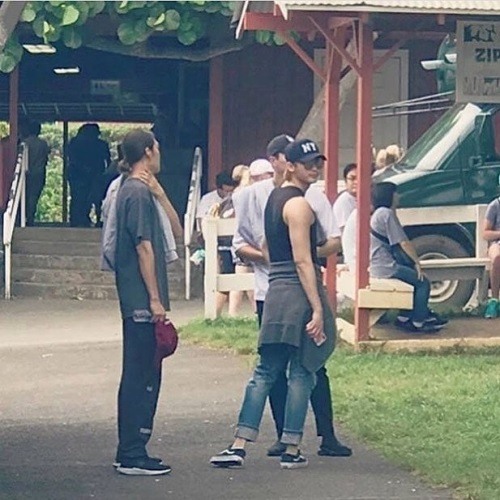 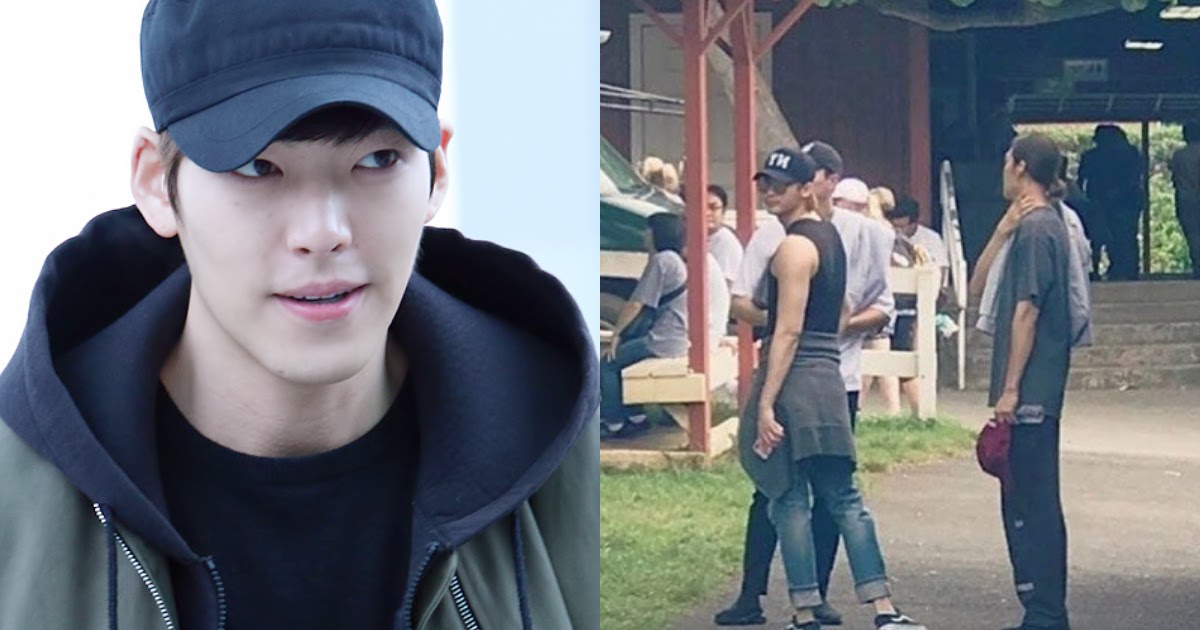 On July 31st, Sidus HQ released official statement pertaining to Kim Woo Bin’s alleged casting and only confirmed that they did receive the casting offer for the film. However, as the project is still under review, the actor’s appearance has not been confirmed.

Details as to which role Kim Woo Bin will be playing were also not revealed, while the film industry remained abuzz for the project.

With God is a film project based on a webtoon about the relationship between traditional Korean gods and the characters, depicted through a satire.

In a recent interview with Kim Woo Bin, the idol-turn-actor revealed that he is hoping to tie the knot when he is around 35 years old!

On the May 9th broadcast of KBS2 variety program Entertainment Weekly, a portion of the show was dedicated to interviewing Kim Woo Bin at the filming set where he was shooting a CF for POWERADE.

He was questioned about when he would hope to get married and he showed good husband material with his answer, “I hope to do so around 35 years old. I want to be a husband and a father who is like a friend to my wife and my child.”

Turning 27 this year, Kim Woo Bin also briefly talked about his ideal type during his fan meeting in Taiwan as “someone like my fans, someone who can allow me to learn from many aspects, because I have many lacking areas.” In that fan meeting, he also confessed his love for Lee Jong Suk, and expressing hopes to hold promotional activities together with his fellow model-turn-actor friends.

In the same segment, he also shared about his alcohol tolerance.

Could you imagine if handsome model-actors Lee Jong Suk and Kim Woo Bin were to form an idol boy group like EXO?

At a recent fan meeting held in Taipei held on April 30th, Kim Woo Bin was surprised with a video by close friend Lee Jong Suk who happily gives him greetings and best wishes. In addition, Lee Jong Suk tells Kim Woo Bin that they should form a group likeEXO.

Later, the MC asks Kim Woo Bin on the idea of forming an EXO-like group, to which he reveals he likes the idea, but there aren’t enough people with only the two of them in it. Thus, he’ll have to contact his other model friends to join.

Lee Jong Suk and Kim Woo Bin are known to be close friends, and this can further be proven after the latter revealed Lee Jong Suk was his real love at the latest fan meeting.

Formerly introduced to the public as Jejudo Gatsby, the drama recently underwent a change in title to Mendorong Tto? which means feeling good and warm in Korean.

The drama follows a romance story with the setting of beautiful island Jejudo. Initially, Kim Woo Bin has been offered to take over the role of character Baek Gun Woo, who is a CEO of a restaurant in the drama. But as of March 18th, it was confirmed that the actor had declined the offer to star in Warm and Cozy.

On the other hand, actress Kang So Ra has verified her appearance and will take on the lead female role.

The Hong sisters are well-known in the drama world and has written many hit dramas, including My Girl, Hong Gil Dong, You’re Beautiful, My Girlfriend is a Nine-Tailed Fox, The Greatest Love, and more.

Meanwhile, the drama is set to air in May after the completion of current drama Angry Mom.

Actors Kim Woo Bin and Lee Jong Suk denied rumors of being cast for the Chinese version of We Got Married, titled If We’re In Love.

On February 6th, rumors surfaced of the two actors joining the Chinese reality show, If We’re In Love, which will be airing in April. However, Kim Woo Bin and Lee Jong Suk’s agencies were quick to state that the news was in fact false.

Lee Jong Suk’s side made an announcement saying that they were never aware of the casting for the show. Similarly, Kim Woo Bin’s agency responded saying, “This is not true. We never even received an offer for the show.”

The two actors have been enjoying high popularity and many fans were disappointed at the denial of the news. Kim Woo Bin’s movie Criminal Designer has been released and is now playing in many countries around the world.

Kim Woobin is one of the most handsome and popular actors out of South Korea right now. From his numerous CF deals and appearances on the big screen, he’s become a force to be reckoned with.

Check out this feature on him titled, “9 Gorgeous Photos of “The Manly Man” Kim Woobin” where he poses for Brand Sieg F/W Collection!

CLICK HERE TO SEE ALL 9 GORGEOUS PHOTOS OF KIM WOOBIN

Kim Woobin has been revealed to be taking part in the filming of Chinese mini movie, “We Are Young”, after behind-the-scenes photos were released yesterday, September 4th.

”We Are Young” will star actors from all over Asia, including countries like Korea, China and Thailand. Fans are anticipating Kim Woobin’s part in the show, as his role in “The Heirs” has catapulted him to Hallyu star status in China.

In the photos revealed, he appears opposite his co-star, Chinese actor Pan Chen, showing affectionate expressions as they carried out the filming. The two co-stars also took selcas together while off-camera.

In other news, Kim Woobin is currently filming for the movie “Twenty” and has also been involved in numerous projects since his role in “The Heirs”.

CLICK HERE TO SEE ALL SEXY PHOTOS OF KIM WOOBIN

Kim Woobin, currently filming for his latest movie, “Twenty”, suffered a knee injuring during the filming.

Woobin was treated at the hospital for his left knee, which he injured while shooting for a scene.

When asked about the injury, his agency responded, “Woobin suffered from a minor injury and will take a few days off to recover.” The actor will be returning to shooting the movie, which is set

Kim recently finished filming “The Technicians” and is currently participating on the shoot of “Twenty.” The actor is to return to filming as soon as he recovers.

“Twenty” follows the love lives of 3 twenty-year-old men and began filming in July 2014. Model Yoo Jian and Kim Woobin have decided to go their own ways after 2 years of dating.

The two met in 2011, when Kim Woobin was a full-time model. They both confirmed their relationship status publicly, and many fans admired their openness.

According to an acquaintance of both Yoo Jian and Kim Woobin, the two became very busy with their own schedules, and thus had no time to contact or even meet each other anymore. However they have known each other for a long time, and so still remain as good friends and colleagues.

On MBC’s FM4U ’2 O’Clock’s Date’, Kim Woo Bin talked about how he manages his income. He revealed that “I gave all my income to my parents for keeping ever since I was a model. I asks my father for allowance each month when there’s a need. But I do not have much to spend on as I’m always working. Recently I splurged on an outfit I wore during filming, which I liked it a lot， I managed to buy it at 40% discount with the help of my stylist”.

On January 7, Kim Woo Bin made a guest appearance on MBC FM4U’s “Park Kyunglim’s 2PM Date”. He shared, “Out of Park Shin Hye, Krystal and Kim Ji Won, I felt most comfortable with Park Shin Hye. It was comfortable to talk to her because she is like a younger sibling to me. I wouldn’t say that I view her as a man would.”

“Park Shin Hye is someone who works extremely hard and has a positive attitude. She also looks after the staff a lot. Rather than a woman, she seems more like a colleague to me. When the cameras were on, she looked at me as though Eunsang was looking at Young Do. I also looked at her as Young Do,” he said.

“Then which female actress seemed more like a woman to you?” asked radio program host Park Kyunglim.

“At the drama filming set, all of them made the male staff members very happy. I think Krystal, however, was the only one who all of the staff members really liked. Whenever Krystal was filming, there was a lot of people gathered. When it was my turn, everyone took restroom breaks,” he said while laughing.

He continued, “Out of all the f(x) members, I would say that Krystal is closest to my ideal type. It’s because we’re friends. The other members I haven’t really had a chance to personally meet, so I’m not close to them.”

Source: www.officiallykmusic.com via  mnet Article by: Karolina Edited by: Jenny

Kim Woo Bin went through a lot to be in the position he is right now. In the most recent episode of SBS‘ “Incarnation”, the actor talked about his rookie years.

He said: “When I first came to Seoul to start model work, I felt bad asking for financial support from my parents, so I lived in the sauna for about six months.” He also explained that he did a lot of model work, but his company was going through tough times and did not pay him.

Kim Woo Bin shocked everyone, saying that he used to fill his stomach with water because I didn’t have money to pay for food and snuck into the saunas since he didn’t have any entrance fees.

He shared: “I’m so happy now though. I’m doing things that I wanted to do.”

Woo Bin later explained what gave him strength during these hard times: “My favorite phrase is, ‘God only gives struggles to people who can overcome it.’ I saw it in a book and it helped me out so much.”

The company Woo Bin used to work with ended up collapsing with the CEO running away with all the money. Luckily, Kim Woo Bin was able to get signed with a better company with trustworthy staff.