Besides my best friend Kēi, I like listening to Smokey Robinson and Chris Brown.

What are the 5 things to know about him? His name, age, hobbies, zodiac sign, and member position? Find out soon!

MEGASTARZ will be introduced one by one. The group will consist of 4 members and there will be a two-part teaser of each member released as time goes on. Their anticipated debut will happen later this year in 2019. What makes this Kpop boy group unique? This Kpop boy group will debut in the States. That’s Los Angeles, California.

This will be the first Kpop boy group as well as the first group for TAURUS THE BULL ENTERTAINMENT. Are you ready for this group?

Don’t worry it won’t take you years to debut. No training fees, no recouping/no break even for the first 2 groups signed.

Are you ready? Auditions

Super Junior look super handsome and suave now, in their 20s and 30s, but what about when they were babies? Most ELFS have seen these before, but it’s always great to look at Super Junior! Here’s our list of 20 Dangerously Cute Super Junior Baby Photos!

WHO IS YOUR FAVORITE SUPER JUNIOR? LEAVE A COMMENT

MR.MR, comprising Changjae, Tey, Jin, Ryu, Doyeon, revealed what happens when they are in a practice room together, as well as a short snippet of them dancing to TVXQ’s old-time classic “Mirotic” and AOA’s recent hot issue, “Short Hair”.

Dressed in comfortable casual attire, the five members show their moves as they reveal what they have been rehearsing recently. From the starting warm-up to the synchronized dance movements, MR.MR showed that they can have fun during their dance rehearsals. The members show their freestyle moves and show all-smiles as they tease their viewers with hip-thrusts and body waves.

Members Tey and Changjae were featured dancing to AOA’s “Short Hair”, showing their ability to mimic the distinctive dance points on the group’s sexy and cute concept. After which, the group also showed a snippet of them rehearsing for TVXQ’s “Mirotic”, which recently became a popular track amongst idol groups to cover.

At the “2014 Hallyu Dream Festival” held last month, B.A.P‘s Daehyun, BTOB‘s Eunkwang, VIXX‘s Leo, and GOT7‘s Youngjae teamed up to perform a special stage, doing a vocal cover of “Mirotic”. It sparked a lot of interest in the public, as the fancam version and official broadcast version show that this cover could be the closest to the original one.

Super Junior will be returning with a new album as early as the end of the month, as confirmed by SM Entertainment.

Just a few days ago, Koreaboo reported Super Junior had begun recording new tracks under the talented producing team, Team Onesound. Now, SM Entertainment has confirmed the return of the super group, as well as a new tour schedule with “Super Show 6.”

Super Junior’s return with a new album is expected to happen as soon as the end of August, said SM Entertainment, as they are already scheduled for “Super Show 6” on September 20 and 21 at the Jamsil Stadium in Seoul, further emphasizing their wish to release new songs before their first concert. Additionally, their comeback may also be delayed a week or two so that Super Junior may have more time to perfect their return performances.

“Super Show 6” is Super Junior’s third world tour, in which they will visit Japan, China, Thailand. Many more major cities around the world is planned.

U-KISS’ AJ stunned fans today after confirming that he is currently in recovery following a surgery.

A few hours ago, AJ updated his personal Twitter account with an update saying, “After the heart surgery, I am in recovery.” A glimpse of his hospital admission was also included in the update.

AJ is initially set to return to U-KISS once he completes his term at Columbia University. NH Media previously tried to discuss schedule arrangements between the university, but was unsuccessful. The decision did not allow AJ to join U-KISS through their recent comeback “Mono Scandal.”

Get Well AJ We Love You – De De Tillman

After the heart surgery, I am in recovery. 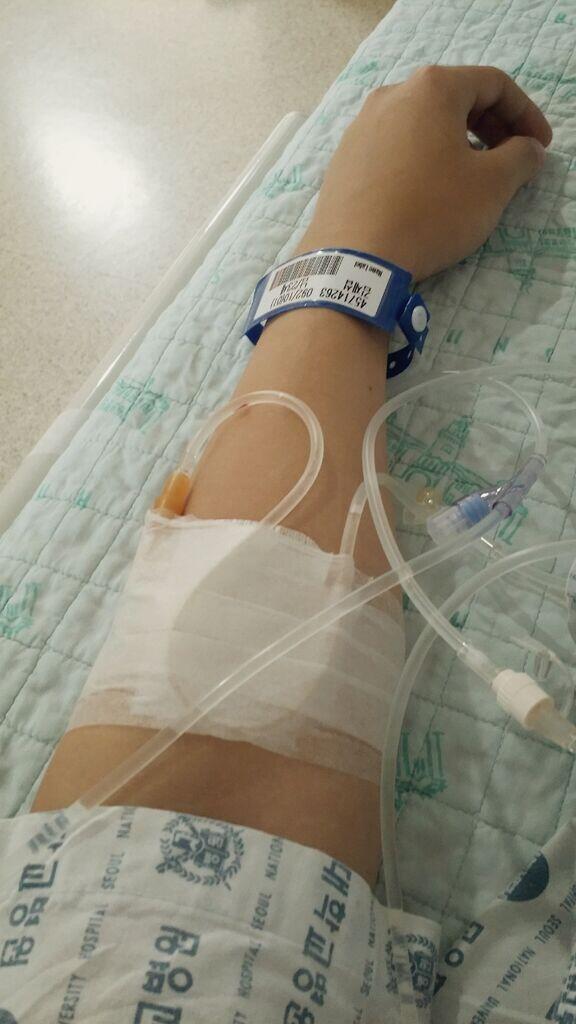 On June 3rd, it was revealed that Jungmin damaged his ankle ligament and will take up to four weeks to recover completely, putting a halt to their plans. This is despairing news to Boyfriend fans, since their showcase and comeback is planned to be on the 9th.

Boyfriend’s company, Starship Entertainment, said, “Jungmin received the diagnosis of a damaged tendon in his ankle on the 3rd and we are waiting for more detailed results. We are a bit taken aback about the situation since the comeback is so close, and we are very sorry to the fans.”

Boyfriend’s second mini-album has captivated the viewers with their new transformed looks of manly, charismatic, and sexy charms. The music video for their new song “Obsession”, is planned to be revealed on the 9th.

SM Entertainment has revealed that EXO will continue as a group of 11 at their first solo concert, “EXO FROM. EXOPLANET #1 – THE LOST PLANET”

In a statement to media, SM Entertainment revealed that EXO will be performing as 11, without Kris. Their concert starts in Seoul Olympic Gymnasium on May 23rd.

In the statement, SM Entertainment said, “The 11 members are trying their best to create a perfect concert to meet their fans’ anticipation. We promise  to bring the best performance and hope to satisfy expectations. We ask for your support and encouragement!”

When asked about Kris’s response to SM Entertainment requesting his return to Korea, the representative revealed, “Following the lawsuit, we have still not been able to get in contact with Kris and his lawyer has not responded to any request of [Kris] attendance. Because all aspects of the concert had to be suddenly adjusted to fit 11 members, everyone is in a difficult situation but are working their hardest.”

The 11 members of EXO have also released a video of them promoting their concert.

100% has released a music thumbnail as well as a handwritten tracklist for “Real 100%”.

The music thumbnail was uploaded onto their official YouTube channel on May 21st and features snippets of each track off the new mini-album.

“Real 100%” will start off with an intro piece titled “Real 100%” then move onto the title track, “Want U Back.” It is a fresh, upbeat dance track with a heavy electronic feel. “Only U” is a cute, lighthearted song while “Flavor” slows it down a bit with a smooth R&B mood. Finally, “Why” shows off a rap with a rhythmic piano background.

A second music video teaser for “Want U Back” was also released. This dark clip features a mysterious trade and intimacy with the female lead, as well as the members dancing shirtless.

The mini-album will be revealed on May 23rd.

SHINee) is a South Korean boy group formed by SM Entertainment  in 2008.  The group consists of Onew, Jonghyun, Key, Minho, andTaemin. They made their debut on May 25, 2008 on SBS‘s Inkigayo with their single, “Replay” (Korean: 누난 너무 예뻐 (Replay)).

According to Koreaboo,  SHINee will be releasing their next Japanese single “1000-nen, Zutto Soba ni Ite…” December 12, 2012.

It will be their 6th single release since their Japanese debut with “Replay” last year.

U-Kiss  Kevin, AJ and Eli hits the kitchen to make Korean food with Chef Seri, According to, KBS World.

After months of anticipation, DSP Media’s newest idol group A-JAX has finally hit the airwaves with their official debut mini-album. Gone are their trainee days, documented by the reality show Making the Star, where fans were able to catch a rare glimpse into the intense preparation and competition that idols must overcome in the hopes of one day becoming big pop stars. These days the members of A-JAX are fully immersed in the difficult rookie stage, and while they may look like your typical male dance group on the surface, do they have what it takes to set themselves apart from the pack?

Earlier this month, a pre-debut music video featuring KARA‘s Goo Hara was uploaded to A-JAX’s official YouTube Channel, showcasing the members’ above-average vocal talent without having them actually appear in the MV. Very smart move by DSP since typical dance/pop debuts tend to rely more heavily on visuals and choreography as opposed to vocals, especially when most ballad debuts have a tougher time capturing audience attention. Lucky for them, A-JAX can now focus on a dance-heavy release without having to worry about proving their musical skills at the same time.

Debut single and mid tempo dance track “One 4 U” is an aggressive declaration of unrivaled love and devotion. We’ve heard plenty a love song in the last few months, but the message is even more convincing when reinforced with epic strings and electric guitar as on this record.

The mythical music video for the debut single is fitting for the group named after the legendary Greek hero. According to numbers thrown around earlier this week, $42,500 USD was the assumed cost of making this MV, but as it turns out, that price tag was just for the CG effects. Whoa.

ONE 4 U SINGLE ALBUM JACKET

B1A4 is signed with WM Entertainment and they debuted in June 2011. The group consists of  CNU, Jinyoung, Sandeul , Gongchan, and Baro. The groups name was formed by their blood types, four out of five members have A blood type and one member has B blood type.

According to Yes Asia, B1A4’s first album Ignition is getting a Special Edition repackage! The Special Edition includes all the tracks from the original album, plus two new songs and two more instrumental tracks. Their new title song Baby Good Night is a retro synth-pop dance number composed by leader Jin Young, with lyrics co-penned by Jin Young and Baro.

This edition comes with a random member photo card and 72 postcards.

Jaejoong and Yunho are 2 hearts that love and miss each other deeply.  Two hearts are always better.  Keep The Faith that  TVXQ 5 members will be back together soon. Jaejoong, Yunho, Yoochun, Changmin and Junsu.

According to Artistwiki, Kim KyongJae (Eli) was born March13, 1991. Kim height is 180cm, his weight is 60kg.  His talent consist of  Taekwondo Kung Fu English Chinese Rap.   He lived in Washington DC so he is very fluent in English, he moved to Beijing to study so he can communicate in Mandarin.

U-KISS is a 7-member boy band They debuted with their song 어리지 않아 (Not Young) in Japan in The Power of Atamix 2008 August 15, 2008 Consolidated fan cafes attracted around 50 000 visitors in just two days after they are established

The group targets not only in Korea but throughout Asia music industry group members are from America, Macau and China together members speak four different languages – English Mandarin Japanese and Korean boys’ ages range from 15 to 21

It was revealed that idol group Infinite has partnered up with YouTube to release special and exclusive content prior to their encore performance.

According to Kpopstarz website, while the group will be performing at their concert, “Second Invasion – Evolution” on 1 April, YouTube will be broadcasting “Exclusive! Infinite Special” before the show.

It was revealed that “Exclusive! Infinite Special” will show Infinite’s colourful performances, as well as “the making of” part of the show. In addition, Infinite is set to perform live and reveal a new song which will be broadcast to fans all over the world.

While YouTube has held many other live concerts for other international stars such as Coldplay, Infinite is the first K-Pop act to have their concert broadcast live. The group will perform live at the Seoul Olympic Park Gymnasium Stadium for their encore concert on April 1st.