Lee Hyori is set to be revealing her new track through Vogue Korea’s fashion film.

On April 19th, Vogue Korea released three exclusive shots from their recent photoshoot with Lee Hyori and stated that the singer will be releasing her new track through a fashion film.

Vogue Korea’s fashion film and new song will be released through their official homepage and Youtube channel on May 1st.

Earlier this week, reknowned Chinese classical pianist Li Yundi performed at a New Year’s Eve music concert where he chose to sing ‘Falling Leaf Returns to Roots’, a hit song by his rumoured love interest and Taiwanese multi-hyphenate Lee Hom. The venue was covered with a shower of rose petal confetti and a photo of the pair was showed in the background, which sparked cries of “Be together!” from the audience at Beijing Workers’ Sports Complex.

Lee Hom and Yundi were first romantically linked after photos of the Taiwanese in the pianist’s apartment surfaced last October.

Having performed the song together on several occasions, ‘Falling Leaf Returns to Roots’ has been interpreted as the duo’s “love song”. While some netizens believe that Yundi is now “out of the closet” with this move, there are also fans who are “speechless” and reprimanded the pianist for stirring news.

When asked on his thoughts of Yundi’s rendition, Lee Hom expressed that it is an honour to have the famous pianist cover his song. “I only found out about it after watching the news. I haven’t watched the clip but I believe he did a good job!” 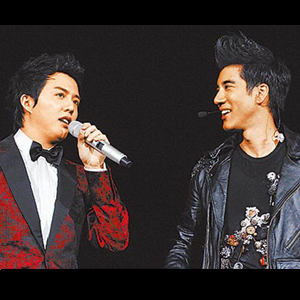