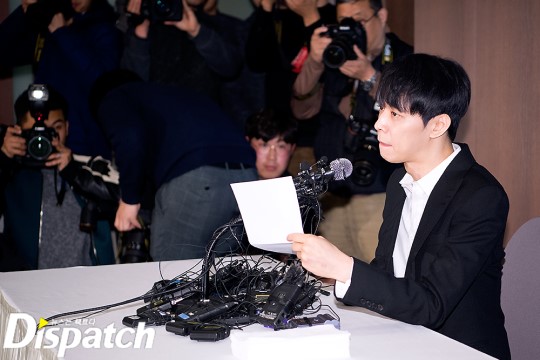 Actor Park Yoohwan and Actress Park Sun Young stars in the MBC’s new drama “I Can’t Live Without You”, they will play a married couple.

Both actors were asked about the age differences, they are 15 years apart and playing a married couple.

Sun Young said she thought she was too old to work with Yoohwan but they worked well together.

Yoohwan said  he likes older women than a younger one and that he didn’t  have any pressure about age differences.

SCROLL DOWN FOR VIDEO AND VIDEO LINK

If they were there then where were they? Were they photographed or filmed?

If Yunho & Changmin were unable to attend, then have they made arrangements to spend time with Yoochun. Have Yunho and Changmin reached out to him by speaking to him personally not through management?

Yoochun was completely out of it, the pain and heartache was shown on his face and if Yunho and Changmin were available, this doesn’t look good for them?

Fans are hurting and crying over TVXQ the five original members and this only hurts more not seeing Yunho and Changmin at Yoochun’s highly publicized father’s funeral.

If Yunho and Changmin have not contacted Yoochun, why haven’t they?

Recently,Changmin lost his grandmother, has Yoochun, Jaejoong, and Junsu contacted him for their condolences?

Fans know Yunho is hurt, they can’t help but to see the pain in his face and eyes,especially, when he hears the fans chanting “Kim Jaejoong’s” name.

Jaejoong has made efforts to reunite with Yunho, he tweeted out for Yunho to check his messages; however, Yunho said he didn’t receive the messages because they changed their numbers plus he ignored a lot of messages due to prank calls.

Also, Jaejoong said he took flight out right after a concert in Japan  to meet with Yunho that was arranged through a friend  but Yunho didn’t show up and Jaejoong said he didn’t have any sleep.

Hopefully, this unfortunate situation will bring them back together as five, at least get back on speaking terms.  This is going on the third year of no communication among Jaejoong, Yooochun, Junsu, Yunho, and Changmin is really nonsense. Life is too short.

CLICK ON THE LINK ABOVE TO VIEW THE FUNERAL.

PLEASE LEAVE YOUR COMMENTS ON THIS?  THANKS