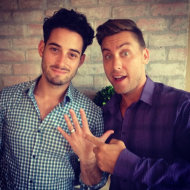 Nate Berkus and boyfriend Jeremiah Brent are officially engaged to be wed, a rep for Berkus tells Us Weekly exclusively. The pair, who have been dating for 8 1/2 months, made it official atop Machu Picchu in Peru on Monday, April 8 — and are excited for the next chapter of their lives together.