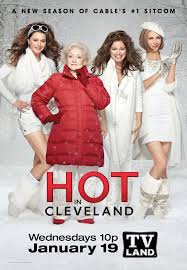 Liza Minnelli  will appear in Season 3 of TV Land’s “Hot In Cleveland.” The 65-year old legend will be playing the agent of down-and-damn-close-to-out actress-of-a-certain-age Victoria Chase (Wendie Malick).

Minnelli is the daughter the late legendary Judy Garland. Can the show handle 2 beauty queens at the same time both  Betty White and Liza Minnelli. What an honor!

Congratulations to legendary actress Betty White for receiving a Screen Actors Guild Award for Outstanding Performance in Hot In Cleveland according to, TV Land.

TV Land President Larry Jones had this to say: “We are so proud to have Betty recognized again for her role on Hot in Cleveland,” “It’s such an honor for us to work with her. She is a true legend and the chemistry between the four women is amazing – they are television all-stars.”

Hot in Cleveland is in its third season and airs Wednesdays at 10PM/9C only on TV Land.