According to, Ph,OMG.Yahoo A person familiar with the situation tells The Associated Press that the Miami Heat star married his longtime girlfriend, Savannah Brinson, at the posh Grand Del Mar Hotel in San Diego on Saturday, less than three months after he won his second straight NBA title.

The person, who spoke on condition of anonymity because the wedding was private, said the ceremony took place in the hotel’s Capella Chapel, and is part of a three-day celebration that will conclude with a brunch on Sunday.

James and Brinson, 27, have been together since high school and have two children. James, 28, proposed in January 2012 in Miami Beach. The wedding was first reported by US Weekly.

LeBron James shoes “LeBron X” is causing a bit of a controversy for the price of his latest Nike shoes. The suggested retail price is $180; however, The Wall Street Journal reported the retail price will be $315 that will be in stores in the fall.

Nike representative Brian Strong cleared up the controversy surrounding the NBA star’s shoe price tag, he made a statement about the main version of the shoe, “The LeBron X will be launched in the fall at a suggested retail price of $180,” Strong said, in a statement. “The initial introduction of the LeBron X will be the red, white and blue Nike+ enabled version and that price is still being set, but will be at a higher price to reflect the Nike+ technology embedded in the shoes.

How much will LeBron James “LeBron X” shoes really cost?

According to Yahoo Sports,  this is the NBA Finals schedule

Miami Heat vs. Oklahoma City Thunder (Games air at at 8pm or 9pm ET on ABC)

According to AP,  Serena Williams is part of a new venture with LeBron James, Amar’e Stoudemire, Chris Paul, and Pitbull to promote Sleep Sheets, which bills itself as a natural sleep aid.

Serena said she’s had trouble sleeping for years because she’s “constantly on a natural high, high on life, and happy, happy, happy, and working.”

She said her sleep difficulty was so bad one year it affected her at the Australian Open.

“Several years ago before the finals, I couldn’t sleep, and I had to take something to relax and make me go to sleep,” she said. “It was obviously a pharmaceutical thing, but I physically couldn’t sleep, and the only thing with that is that it slows you down the next day.”

“I did, but I was a little sluggish,” she said, laughing. “It’s nothing that I ever want to do again. I can’t put the finals of the Australian Open on the line because I can’t sleep.”

Besides her excitement for upcoming Grand Slams and the Olympics, Serena said she’s also still focused on her side ventures, which include an upcoming appearance on the TV show Drop Dead Diva, her nails (she’s a licensed manicurist and has a nail polish line), her clothing company, Aneres, and business school, just to name a few.

NBA Miami Heat’s LeBron James made a child cry at a NBA game.

James played against the Orlando Magic on Sunday February 19, 2012 when he crashed between two kids sitting in the court side seats; however, James asked the kids if they were all right. Click on the video to see more.

Former President Bill Clinton was also at the game. 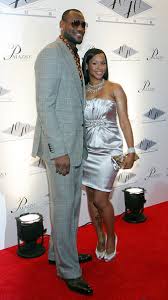 According to People, NBA star Lebron James 27, popped the question to longtime girlfriend Savannah Brinson at a South Beach hotel.

James and Brinson are the parents of  2 sons LeBron Jr 7, and Bryce 4.James  teammate Dwayne Wade hosted the event and it was also a belated birthday celebration for James, who turned 27 the day before.
I wonder if this has anything to do with the fact Michael Jordan is getting married. James does everything Jordan does.

SAN FRANCISCO –  Here we go again with the arrogance of Dwyane Wade and the wannabe Michael Jordan> LeBron James having too much time on their hands to make fun of Dirk Nowitzki being sick.  The funny part of this is that Dirk was sick and still managed to beat them.  The Mavs are up 3-2 .

Wade said he coughed and made a joke about the cough because they both knew the camera was in their face.  Dirk called Wade and James “Childish and Ignorant”. Dirk was playing  with a high fever trying to win the game while James and Wade had too much free time on their hands making fun of  him.  They are unprofessional knowing the camera was on them.  They  are getting paid to bring a Championship to their  city,  they  are not  getting paid to mock someone.

Long gone are the classic days of  Magic Johnson and Larry Bird basketball.

The Dallas Mavericks and The Miami Heat are playing for the Championship.  LeBron James is taking a lot of heat for being  with the heat for leaving Cleveland and thinking he’s better than the great Micheal Jordan.  Dwyane Wade does have a ring thanks to Shaq.  I am pulling for Dallas due to the fact James and Wade head is too big.  If Miami does win, so be it.  I know Dirk can get the job done if he wants to win.  LeBron had a right to leave Cleveland however he was wrong to leave.  Michael Jordan stayed with Chicago and brought Championships with the help of  Scottie Pippen.  Reggie Miller retired with The Pacers, he stayed loyal to the city.  Karl Malone left Utah and  jumped on the bandwagon trying to get a ring with The Lakers.  LeBron should have stayed in Cleveland and worked hard to bring a Championship to his hometown state and not be a trader.

SAN FRANCISCO –  Former NBA Chicago Bull’s Star Hall Of Famer Scottie Pippen had the audacity to say that Miami Heat LeBron James “may be the greatest player to ever play the game” on ESPN Radio’s “Mike and Mike in the Morning.  Once the fans blasted Pippen for making a ridiculous statement he then took it back and tried to clean it up. This is what I was talking about on one of my past blogs called ” Two-Faced Celebrities” and now I can add Pippen to the list.

I am not a Michael Jordan fan, however, Pippen should have never disrespected Jordan.  Jordan has rings, If  James won today it will still take him 6 years to catch Jordan.  Pippen said LeBron James  “may be the greatest player to ever play the game.”  I wonder if Pippen ever heard the  name Magic Johnson, Larry Bird, Wilt Chamberlain, Walt Frasier, and I guess Pippen never heard the name Bill Russell and more.  Pippen does not have to like Jordan, however,  he must not disrespect him either. If he said something he should not have back track to clean it up,  Pippen must have meant it or he would not have said it.

James will play the Dallas Mavs 5 /31 /11 Tuesday night in Game 1  for the chance at the NBA Championship.