SPICA announced that they have decided to disband after 5 years of activities.

Nicknamed “Lee Hyori‘s group”, girl group SPICA debuted under B2M Entertainment in 2012 with “Russian Roulette”  has disbanded after 5 years together.

The members of the group – after lengthy discussion – recently agreed to go their separate ways. The members have already been living separate from each other, and are currently looking for new agencies.

SPICA re-signed with CJ E&M in 2015 and were absent from the stage for a long time before making a comeback in 2016 August. The results, however, were not as good as the group had hoped and it had been decided that the members all go their separate ways.

CJ E&M officially announced their statement regarding the disbandment shortly after the news was published.

The members’ contract with CJ E&M and B2M Entertainment have yet to expire and the companies are currently under discussion of how to deal with this matter.

Lee Hyori shows her impeccable dance moves as she watches the latest episode of Infinite Challenge’s “Saturday, Saturday is for Singers (TOTOGA)” episode.

On the two clips, Lee Hyori was featured in front of their television, dancing along to Lee Jung Hyun and Uhm Junghwa’s performances, wholeheartedly. The update further came with the text saying, “She’s on top of the world,” which earned positive responses from his followers.

29 MALE IDOLS PASSIONATE KISSING EACH OTHER

While most K-Pop idols are known for their unique photoshoots and more intricate fashion styles, there are some pretty sexy shoots as well! Unknown to many fans, there are K-pop idols who have taken modeling to new levels of sexy, and participated in artistic topless photo shoots. This list of 14 Shocking Topless Photoshoots By Kpop Idols will undoubtedly surprise even the biggest of K-pop fans. Could your bias be on the list?

Lee Hyori talked about her worries and struggle dealing with a disease called syringoma, an eye disease, on a recent show.

On the SBS show, “Magic Eye,” which was aired on the 29th of July, Lee Hyori started by answering a question about her looks, and said that she also has some dissatisfaction with her appearance. She then opened up about her condition and how little bumps can be seen under her eyes. Called syringoma, it is condition when non-cancerous bumps form, usually along the tear ducts, lower eyelid, or upper cheeks. She also continued to explain that there is no cure.

She explained that luckily, syringoma is not dangerous or harmful, and has no effect on health. However, living as a singer and celebrity with high definition cameras being able to focus on every pore, she did admit that she was concerned about them.

Lee Hyori has updated her personal Twitter with an important message to Jeju tourists.

After Lee Hyori married Lee Sangsoon and moved to Jeju Island, people who have been holidaying to Jeju Island have been growing an interest as to where they were living and what their house was like.

However it seems that their private property has been attracting too many people, and giving their family a lot of stress and discomfort.

Thus on the 28th of June, Lee Hyori updated her Twitter by writing, “Dear Jeju tourists. I’m sorry but our house is not a tourist attraction. Our family is receiving a lot of stress due to the constant ringing of our doorbell and alarm from the early mornings. I know you must be very curious, but please understand.”

She also explained, “Also our front gate is covered by trees so you can’t see our house at all. You will have travelled a long way for nothing. I will upload more photos on my blog so please do not be upset.”

Everything about their wedding was tightly veiled, but now Lee Hyori is sharing just a little bit of the happiness that occurred at her wedding with Lee Sang Soon.

On September 3, Lee Hyori uploaded photos of her wedding onto her fancafe, allowing her fans to be the first to see the exclusive photos. The wedding took place in a private ceremony with just family and close friends on September 1 at the villa that Lee Hyori and Lee Sang Soon built together.

“I’m saying hello since everyone’s probably wondering how the wedding ceremony went. Because I made it private, I heard a lot of people were upset and that many reporters were outside… I’m sorry,” wrote Lee Hyori.

“As an important day in my life, I hope you understand that I just wanted to be a normal daughter and daughter-in-law to my family and close friends. We were worried that it would rain, but the weather was great. The wedding preparations were rough, but it was meaningful and enjoyable.”

Congratulations to the newlyweds! 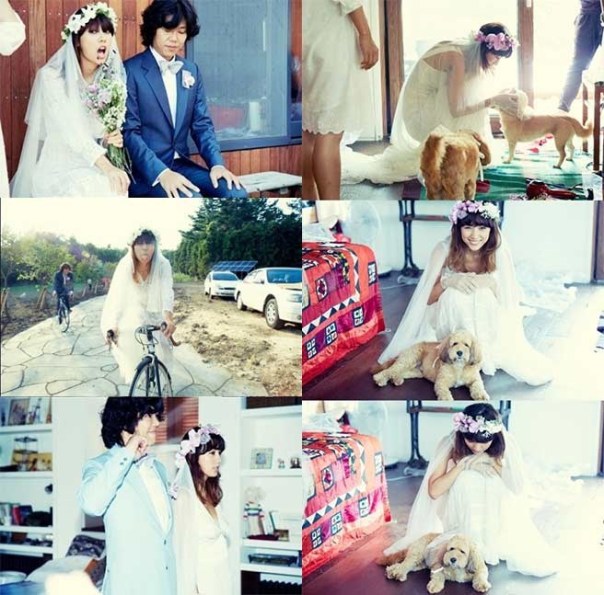 In the upcoming episode of OnStyle’s Lee Hyori’s X Unnie, the Spica member received one million won in their bank accounts from Lee Hyori.

Lee Hyori told the members to share the money and buy clothes before coming to her house. Each member was given 200,000 won to spend on clothes according to her personal style.

The reason behind the allowance was for Lee Hyori, and friends, stylist Han Hye Yeon and designer Yoni P to assess each member’s fashion styles.

Finally realizing why Lee Hyori gave them allowance, the Spica members were caught off guard, but did the best of their abilities to show off their personal styles.

The episode will air on August 13.

Both of Lee Hyori and Lee Sangsoon’s respective agencies have denied recent reports of the couple tying the knot this September.

Earlier today, it was reported that Lee Hyori and Lee Sangsoon will be getting married this September and that wedding invitations are already made. Reports revealed that the couple plan on a quiet wedding, only inviting close family and friends to the ceremony.

However, B2M Entertainment immediately retracted the reports and denied news of Lee Hyori tying the knot with her partner, Lee Sangsoon, further denying that there were no invitations for the said wedding made. The agency also stated that it is difficult to reveal private information on the said situation.

Entertainer Lee Hyori announced on her fancafe Hyori Together  that she would marry her boyfriend Lee Sang Soong. They have been dating since 2011.

KIM HYUN JOONG AND FRIENDS STAY ALL NIGHT AT HIS HOUSE

Lee Hyori’s comeback album “Monochrome” will be her fifth studio album. The singer will kick off promotions for her new album through a special Mnet broadcast that will contain special performances of songs from “Monochrome.”

Lee Hyori is set to be revealing her new track through Vogue Korea’s fashion film.

On April 19th, Vogue Korea released three exclusive shots from their recent photoshoot with Lee Hyori and stated that the singer will be releasing her new track through a fashion film.

Vogue Korea’s fashion film and new song will be released through their official homepage and Youtube channel on May 1st.

Singer Lee Hyori is working on a new album set to release sometime in 2012.

Lee is in the process of picking out songs for the album then will start recording the songs selected according to the singer’s agency.