Zoe Saldana may have tied the knot in secret, but the 35-year-old actress isn’t shy when it comes to PDA. The newlywed was spotted leaning in for a big smooch with her hubby Marco Perego as they stepped out together in New York City on Friday, Nov. 8.

During the outing, the lovebirds were photographed kissing on the sidewalk while waiting for a taxi.
Read more: http://www.usmagazine.com/celebrity-news/news/zoe-saldana-husband-marco-perego-caught-kissing-making-out-in-nyc-picture-2013911#ixzz2kNZOndw4
Follow us: @usweekly on Twitter | usweekly on Facebook

Actress Zoe Saldana is not wanted by many fans to play Nina Simone in a film. A petition has surfaced to see who would be the perfect actress to play Simone.

I would cast either Whoopi Goldberg, CCH Pounder or, Alfre Woodard

WHO WOULD YOU CAST? AND WHY?

READ MORE ON SALDANA AND SIMONE 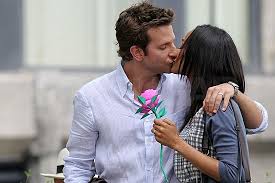 According to New York Post, Zoe Saldana and Bradley Cooper could make their first public appearance as a couple at the Sundance Film Festival. The pair, said to have been quietly dating for months, will be in Park City from Thursday to promote “The Words,” in which Cooper plays an aspiring writer who finds another author’s memoirs and claims them as his own. There will be a cast dinner Thursday before the movie is screened as the festival’s closing-night premiere on Jan. 28.

Actress Zoe Saldana and her fiancé Keith Britton have broken up. The couple announced their engagement in 2010. They own a business called My Fashion Data Base which they will continue to operate together.

Singer – Actress – Host Jennifer Lopez recently had dinner with Actor Bradley Cooper at a New York restaurant and they have been seen at other events together. Does this mean they are Hollywood’s newest couple?

Lopez is divorcing singer Marc Anthony and it’s a rumor that Anthony allegedly had an affair with Jada Pinkett Smith.  Cooper has been link to actress Zoe Saldana.

Saldana’s character Cataleya is taught to be a killer, possibly for revenge after her parents were killed when she was 9 years old. Colombiana is directed by Olivier Megaton.

This film is drama, adventure, action, and rated PG-13.

It is final! Actor Ryan Reynolds is now divorce,  single,  and free.  The divorce was final Friday July 1, 2011 in Los Angeles, California.  Reynolds current film is “The Green Lantern,”.

Reynolds was married to Scarlett Johansson who broke his heart and is now linked to Sean Penn (Madonna’s Ex Husband).

Earlier Reynolds said he had been crying because his heart was broken and divorce was painful.  He is not looking to get married anytime soon.  He is currently filming a movie with Actress Zoe Saldana.

SAN FRANCISCO –  Bradley Cooper is in Montreal filming the film The Words with co-star Zoe Saldana.   Saldana is engaged to Actor Keith Britton for now.  Cooper and Saldana was kissing on the set, doing their job as actors, however,   it’s a known fact that celebrities meet on sets and hook up after that,  a prime example was Brad Pitt having an affair with Angelina Jolie while working together and publicly humiliated and crushed  his then wife Actress Jennifer Aniston’s heart.

Cooper  and Saldana are single, they are not married, they are still free to mingle, an engagement doesn’t mean a thing in Hollywood. I wonder what would be Saldana’s reaction if her fiance was lip-locked on the set with Halle Berry, Beyoncé or Janet Jackson. Is Cooper and Saldana being strictly professionals or will there be romance off set? The media and fans will have to wait and see for the exclusive story.

Cooper’s latest film The Hangover Part ll is number 3 at the box office as of Friday June 10, 2011.

HERE IS THE LINK TO PICTURES OF BRADLEY COOPER AND ZOE SALDANA KISSING:http://blogs.indiewire.com/shadowandact/archives/2011/06/09/first_look_pics_of_zoe_saldana_bradley_cooper_in_blacklist_plagiarism_proje/